Joined Sep 20, 2017
·
85 Posts
Ah the Italians, they're the only ones that can make a carburetor sexy. I get excited just looking at a twin throat Weber or Dellorto.
P

Joined Jan 28, 2018
·
209 Posts
I had Amals on my Mini Cooper, a pair and they had to be balanced and looked after. I had an 800 Holley with Annular discharge boosters on my 502 and that was the sexiest carb I ever had, and it just stayed where I put it for years.
► Show Full Signature
Everything! They eat everything, and fear is their bacon bits!


The photo above is of a Jaeger sports instrument panel for the 404C that was sold as an accessory in the 1960s. I have wanted one for a long time, but they are rarely for sale and when they are, the cost is very high, 1000+ Euros.

So I have been looking to make one myself, using Canadian versions of these same gauges from the same era (or just afterwards, late 1960s). In this case I have put together five of the six necessary gauges, as shown below:

The speedometer with trip odometer is from a Renault 8 Gordini, Canadian version, as are the battery and temperature *F gauges. The rev counter is from a Renault 8S from Canada, which has a redline at 6200 RPM which is about correct for a 404 Injection. The fuel gauge is also from the 8S, but identical to that fitted to the Gordini.

However, when the 404C is first assembled I will be using the original instruments. This one will be added a few years later.
► Show Full Signature
Peugeot 404 Coupé Injection 1966
Mercedes-Benz B200 2008
smart BRABUS cabriolet 2010

A couple of weeks ago I managed to get the passenger door lock installed and working, something that eluded me last time. Then I put the side glass in and tried rolling it up, and the cables were binding on the winding drum so it would not go up more than halfway.

Recognizing that the previous installation was not done properly , I had to take it out. The drum that has the cable windings on it was a total mess, a rat's nest of tangles. I spent about 90 minutes doing random stuff to it like un-looping cable, not fully knowing what I was doing. But in the end I got the drum wound properly - one end of the cable on one side of the drum and the other end on the other, with five windings of cable over the drum in between. Holding it carefully I reinstalled it in the door and then installed the glass again (1 hour's work there) and it works!

A week ago I put the upper stainless steel trims (freshly polished) on the rear 1/4 windows. The clips that hold them on are not spring steel but rather have to be bent into shape. While doing this, the screwdriver slipped and I did some unintended surgery on my left index finger joint, grinding into the nerve. Getting better now but it was quite nasty. The car was uninjured, most importantly!


I was dreading removing for the second time the driver's side window winder cables to reseat them properly. It went reasonably well. As did the installation of the window tracking. The nightmare was installing the interior door opener - getting the clip on to the door latch, blind and inside the door was "fun". I also installed the door lock. Installing the glass is a pain too. Ugh, glad it's over.
► Show Full Signature
Peugeot 404 Coupé Injection 1966
Mercedes-Benz B200 2008
smart BRABUS cabriolet 2010

Installed passenger side vent window with the new gasket....


Record rear dampers installed. Wish I could get Peugeot rears but I can't...

With some help: my youngest daughter put the nut that holds the rearward part of the front fender trim on - that is only accessible with the front door opened about 45 degrees, because even like that, there is about 3 mm of space to play with to get the sucker spinning on the captive bolt that's attached to the stainless steel trim. All other connections are easy. My other daughter did the passenger side a couple of months ago. My fingers are too big to get in there properly!

Clearcoat on the Carrosserie Peugeot plate.

Heater core box is mounted in the car with new foam to seal between the air intake in the bodyshell and the bakelite box.


6 Jaeger France gauges in MPH and degrees F ( but the oil pressure is in bar - luckily I am bilingual ) plus the 5 original warning lights that make up part of the sports instrument panel for the 404 Coupé and Cabriolet.

Now I have to get two or three of these gauges refurbished and have a metal plate to hold them made up.
► Show Full Signature
Peugeot 404 Coupé Injection 1966
Mercedes-Benz B200 2008
smart BRABUS cabriolet 2010

Joined Nov 5, 2012
·
371 Posts
The Dynamat installation is done.*Onto the electric washer pump (mounted under the dashboard) next and then the steering column + pedal box will be installed in a week or so.

Joined Nov 5, 2012
·
371 Posts
The seats went to the upholsterer 11 days ago, to be redone in dyed-through light grey leather with natural grain (not embossed) and they will be fitted with heating elements.....which will necessitate a better alternator than the standard 400W SEV-Motorola unit the car came with.

I bought a different set of rubber isolators for the wiper motor and drive, because it's in a colour that more closely matches the latex rubber original. *The pale red ones in the photo will be used in the 404C and the others will be spare parts. *All the red ones are in what seems to be silicone rubber so should handily outlive the originals.
► Show Full Signature
Peugeot 404 Coupé Injection 1966
Mercedes-Benz B200 2008
smart BRABUS cabriolet 2010


I finally got the steering column mounted. Instead of the flector I used a Paulstra Septor for the pinion link.
► Show Full Signature
Peugeot 404 Coupé Injection 1966
Mercedes-Benz B200 2008
smart BRABUS cabriolet 2010

Joined Nov 5, 2012
·
371 Posts
The handbrake cable and control were assembled and mounted today, along with the pedal box.

The worst part of the whole operation was discovering that the buttress under the driver's side, which is a Peugeot original, has a captive stud that is about 6 mm too short to hold the metal handbrake sheath under the driver's floor. So I had to remove the brass clamp and reduce its thickness by about 3 mm on both sides using a Dremel and files (good old engineering on this part, with massive redundancy) in order to get it on.

The pedal box was dead easy of course and the stuff under the car was as well.

Joined Nov 5, 2012
·
371 Posts
The front seats have been reupholstered by Geoff Chrysler.

Very nice: natural grain dyed through light grey "Hyde" brand leather, with heating elements (I'll need a better alternator than it came with to power that!). Parts of the headliner (also redone by Geoff) are visible in the foreground.

His next task is redoing the rear bench, which has a fold-down armrest. I may get the parts in the photo this coming Monday.


The stainless steel trims from front and rear windscreens as well as the back of the roof buttresses.

Joined Nov 5, 2012
·
371 Posts
Since I"m visiting for the first time in 11 months today, I'll just say that the interior is basically done, the glass is all in and new brake lines and fuel lines in Cunifer were made by me for the car. Remaining work is the engine rebuild (it's dismantled now), gearbox bearing replacements, and brake system assembly. Hope to have her on the road late this year. Weather permitting! 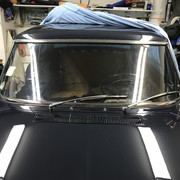 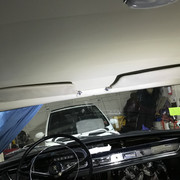 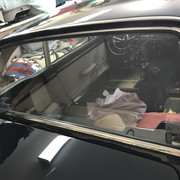 18 fuel injectors (for 4 cylinder engine!) tested and graded as to pressure (14 quite good; 6 perfect or nearly) 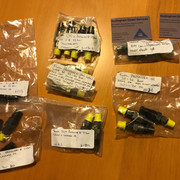 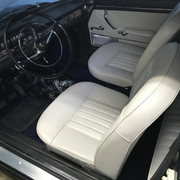 Another view - headliner and door panels 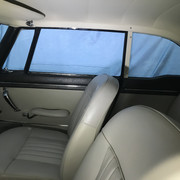